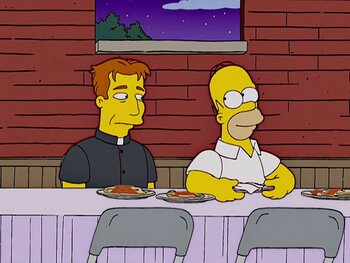 When Bart is unjustly expelled for an incident at a medieval-themed fair at school that wasn't his fault, he's sent to a Catholic private school led by an Irish priest (voiced by guest star Liam Neeson) who shows Bart and Homer the fun side of the Catholic religion. Naturally, Ned, Marge, and Reverend Lovejoy (who are Protestant) don't agree.