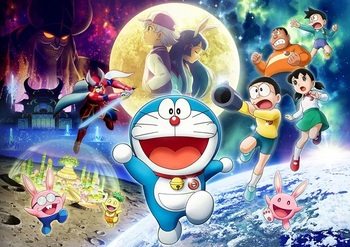 Doraemon: Nobita's Chronicle of the Moon Exploration is the 39th film installment in the Doraemon franchise. The film was released in Japan on March 1, 2019.

Nobita believes that a real rabbit lives on the Moon. Doraemon then uses one of his gadgets to make a theory of rabbits living on the moon become true, prompting Nobita to invite the gang, along with a mysterious new classmate to join the experience.