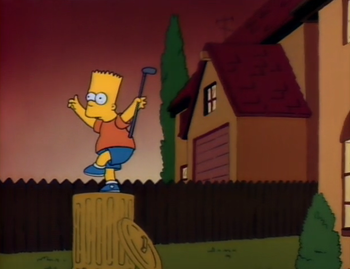 Homer is becoming increasingly annoyed by Ned Flanders inadvertently one-upping him in every possible way, what with having a better house, well behaved children, and a more attractive wife. Ned humbly tries to apologise for having things easier than Homer by sending him a letter, only to be met by ridicule. Things come to a head when Homer and Bart run into Ned and his sons at Sir Putt-A-Lot's Merrie Olde Fun Center, where Ned is quick to point out what a talented miniature golfer Todd is.

Todd and Bart are both interested in entering a miniature golf tournament, and Homer uses this as an excuse to try and show up Ned once and for all by goading him into making a bet where the father of the 'boy-who-doesn't-win' has to mow the winner's lawn in his wife's Sunday dress. Ned agrees, and Homer begins to put Bart through his paces so that he'll easily beat Todd.

Until season 29, this was the last episode of The Simpsons with music composed by somebody other than Alf Clausen. This episode was composed by Ray Colcord,note music composer for Embassy Television sitcoms like The Facts of Life in his one and only contribution to the show.