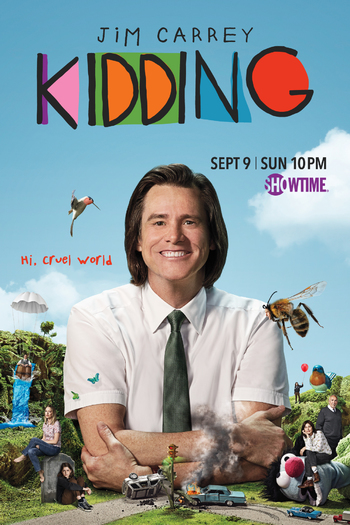 "Do we need another show about colors? Kids know the sky is blue. They need to know what to do when it's falling."
—Jeff Piccirillo (a.k.a. "Mr. Pickles"), "Green Means Go"
Advertisement:

Kidding is an American comedy-drama series which premiered on Showtime on September 9th, 2018 and ran two seasons, wrapping up in 2020.

The series follows one Jeff Piccirillo, who for 30+ years has been known to a loving public as "Mr. Pickles", the perpetually optimistic and gentle presenter of the public television children's show Mr. Pickles' Puppet Time. In reality he is as idealistic as his onscreen self — but one year prior to the start of the action, a freak accident claimed the life of one of his adolescent twin sons and led to the dissolution of his marriage. His resultant struggling with the grief of both bereavement and estrangement from his wife Jill and surviving son Will is starting to affect his work. His executive producer (and father) Seb is out to carefully conceal this from the public, much to the distress of Jeff's sister (and puppet maker) Deirdre, who is having her own problems with a troubled marriage and the effects it's having on her daughter. Can Jeff accept and cope with the heartaches of the real world while still being the All-Loving Hero he feels a responsibility to, and wants to, be?

Jeff calling out his son

Jeff calling out his son