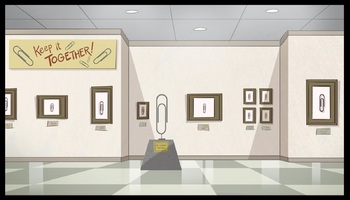 "We're going to spend the next eight hours learning about the genius of this little bent of wire."
Advertisement:

There are museums that contain some pretty interesting things. There are museums that contain things that are downright weird. This, however, is a museum where the subject is extremely boring. It could be the location of a disappointing Class Trip, although if Played for Laughs at least one member of the visiting party will be fascinated. It might actually be made even more boring by an especially tedious tour guide. It might also overlap with Nature Is Boring if the museum is nature-related.

May be a source of Incredibly Lame Fun.

Wagstaff School goes on a field trip to the Marionette-odeum and Louise discovers how boring and bad it is.

Wagstaff School goes on a field trip to the Marionette-odeum and Louise discovers how boring and bad it is.