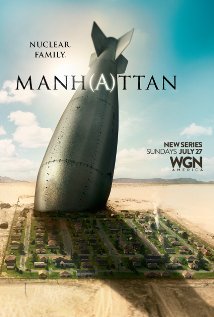 Manhattan is a series for WGN America and airing on Hulu. Set in World War II, 1943, at the time of the Manhattan Project but using a group of mostly fictional characters, the series focuses on a New Mexico town the outside world knows nothing about. The federal government tells the scientists only what they need to know, while the scientists keep secrets from their families.

After running for two seasons, it was cancelled on February 3, 2016.

Not to be confused with the Woody Allen film.