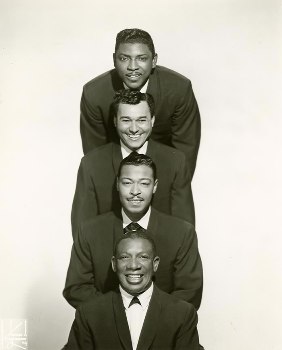 The last thing you hear before the bombs fall.
"I don't want to set the world on fire..."
— Bill Kenny sings a song associated in the popular consciousness with something that wouldn't be invented for another four years.
Advertisement:

The Ink Spots were a hugely popular and influential African-American vocal group active for 20 years (1934–54), who were an important forerunner of later rock and roll, Doo-wop, and rhythm & blues acts, as well as one of the first all-black musical groups to gain widespread popularity with white listeners.

The group started out as "King, Jack and Jester" in 1933 with Deek Watson, Jerry Daniels and Charlie Fuqua. The following year, Hoppy Jones joined and the now-quartet became "The 4 Ink Spots". Their first recordings were issued in 1935 on Victor Records to little success.

Daniels was replaced in 1936 by Bill Kenny, whose unusually high tenor voice would lead the group to major success. It was around that time they moved to Decca Records, for which they would record for the rest of the original group's existence.

Along the way, the group had some lineup changes. Fuqua was drafted in 1943 and was replaced by Bernie Mackey, then Huey Long before returning in 1945. Jones died of a cerebral hemorrage in 1944 and was replaced by Cliff Givens for a few months, then by Bill Kenny's twin brother Herb until 1951, when the group's valet Adriel McDonald took over while Herb went on a solo career.

With the death of what was a father figure of sorts for the group, infighting between Bill Kenny and Watson reached a breaking point and the latter left in 1944 to form his own group. The first of many legal battles over who could use the "Ink Spots" name ensued, with the final judgment being that Kenny had the rights on the name. Watson called his new group the Brown Dots and his place in the Ink Spots was taken over by Billy Bowen, who was himself replaced by Teddy Williams in 1952, then by Ernie Brown a few months later, then by Henry Braswell in 1954.

Charlie Fuqua left in 1952 to form his own group, which had to be named "Charlie Fuqua's New Ink Spots" by court order but went under the "Ink Spots" name regardless. His place was taken by Everett Barksdale, then by Jimmy Cannady the next year.

Ersatz Ink Spots aside, the original group mostly faded into obscurity until 2008 when several of their songs were included on the soundtracks to the wildly popular video games Fallout 3 (their song "Maybe" had already been used for the opening and closing cutscenes of the first game, but it was 1997; computer games weren't quite "mainstream" just yet) and BioShock (followed soon after by their immediate sequels). This established them as the go-to guys for any video game looking to create a "retro" atmosphere, whether taking place in mid-20th century Film Noir times or said era's vision of the future and they've appeared in many titles from different publishers since.

As an aside, only one of the members of the actual band, Huey Long (no relation), lived to see any of this revived popularity, dying in 2009 at the ripe old age of 105.

Note about the cello: the original cello player, Hoppy Jones, plucked it like a string bass. His successors only mimed playing it but still held one because Jones' cello was seen as an integral part of the group.

It's All Over But the Troping: