Characters / The Flash  The Flashes 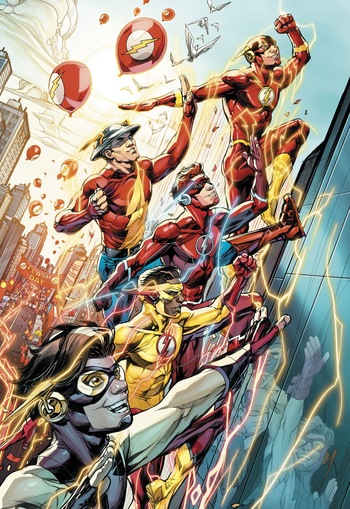 All Flashes provide examples of the following tropes: 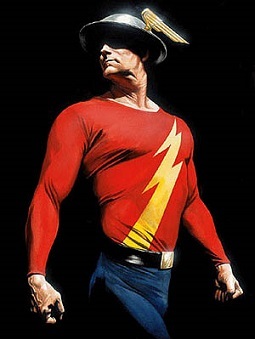 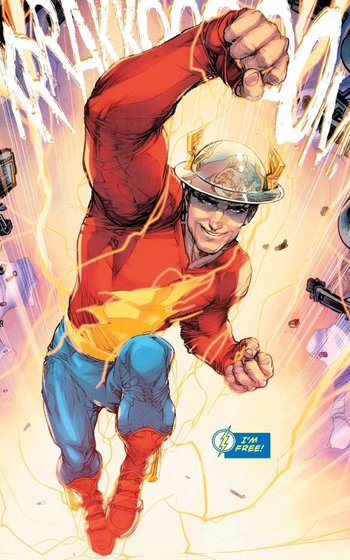 The original Flash. Jay Garrick was a college student who inhaled radioactive fumes in his science lab; after waking up from a brief coma, he found he had super-speed and fought crime as the Flash. Jay fought in World War II, was a founding member of the Justice Society of America, and became good friends with his fellow mystery man, Alan "Green Lantern" Scott. Jay retired as a result of the anti-Communist paranoia of the 1950s, but the appearance of Barry Allen as the new Flash brought him out of retirement, becoming a fatherly presence to the rest of the superhero community and one of its elder statesmen.

Like all Golden Age DC heroes, he was originally an inhabitant of Earth-2 in pre-Crisis on Infinite Earths continuity. In fact, he was the first Golden Age hero to meet his Silver Age counterpart, Barry Allen, in one of the first instances of travel between universes. After the Crisis, the history of his world was merged with that of Earth-1 to create New Earth, and his history was folded over into the new continuity. Now, Jay and his generation were active in World War II before being sent to Limbo. When they returned, the JSA reformed as a way for the older generation to mentor the new. Jay also took an active hand in guiding Wally West, the third Flash and Barry's former protege, and the two would form a Flash Family together.

After the universe was altered as a result of Flashpoint, Jay was stuck in the Speed Force, and the Golden Age of heroes never existed due to changes to history. Eventually, after the figure responsible undoes the changes to the timeline, the Golden Age of heroes in the 1940s is restored, and Jay manages to free himself from the Speed Force. Now returned in the modern day, Jay is once again the Flash.

Having discovered his mother murdered and his father blamed for the act, forensic scientist Barry Allen sought to clear his father's name and find the real killer. After being doused in chemicals and struck by lightning, Barry was granted the gift of super-speed. Now he protects his hometown of Central City as The Flash, the fastest man alive and founding member of the Justice League.

See the tropes related to Barry on his own page here.
Kid Flash I / The Flash III

Coming from a broken household, Wally West's life changes for the better when he meets his idol the Flash. Gaining superspeed from a similar accident, he takes the Kid Flash name and becomes Barry Allen's first protegé. Following Barry's death, Wally decides to follow in his mentor's footsteps and becomes the new Flash.

See the tropes related to Wally on his own page here.
Advertisement:
Impulse I / Kid Flash II / The Flash IV 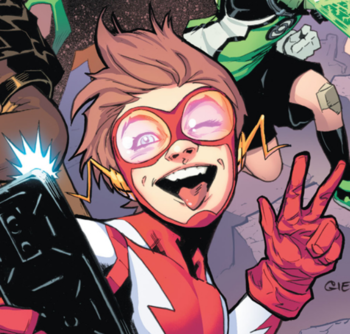 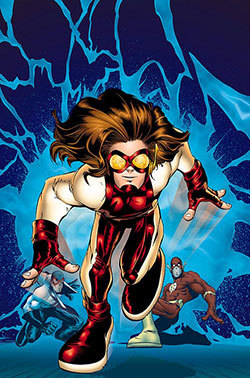 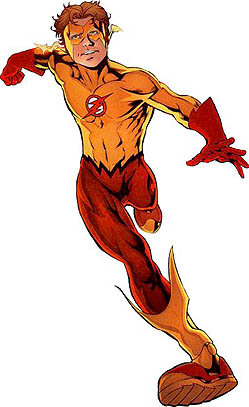 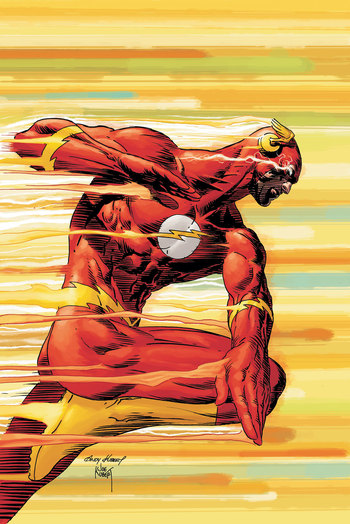 The grandson of the second Flash, Barry Allen, Bart Allen was the product of the union of the two Feuding Families: the West/Allen family and the Thawne family. He was born in the 30th century, and his connection to the Speed Force gave him Rapid Aging. Bart was also abducted by the Earth's government (whose president was his maternal grandfather) and raised in a fast-paced virtual environment where he could mature as fast as he aged. His grandmother, Iris, eventually took him back to present day where Wally West, the third Flash, gave him control over his Super Speed which stabilised his ageing. After this, Bart took up the codename of Impulse, and moved to Alabama where he was raised by fellow speedster Max Mercury. He later became a founding member of Young Justice and close friends with Tim Drake (Robin III) and Conner Kent (Superboy).

After the dissolution of Young Justice, Bart later joined a new incarnation of the Teen Titans. After he was shot in the knee by Deathstroke, he took up the mantle of Kid Flash. After this, Bart became more troubled and eager to prove himself than he had prior. He was later absorbed into the Speed Force during Infinite Crisis to temporarily imprison Superboy-Prime in the Speed Force, and when he returned, aged four years older. After the apparent destruction of the Speed Force, Bart hid that he retained his powers, but circumstances saw him briefly become the fourth Flash. His career ended when his Evil Twin, Inertia, orchestrated Bart's death with the aid of the Rogues. During Final Crisis, he was restored back to life and de-aged, becoming Kid Flash once again.

This wouldn't last long, however — Bart sacrificed himself to repower his uncle during Flashpoint, all without his uncle's knowledge. Bart would be forgotten by the world, much like the rest of the Flash Family, when the universe was altered into its New 52 version. However, after a clash in the Speed Force between Barry, Wally and Hunter Zolomon, Bart was freed from the Speed Force and would return as Impulse. 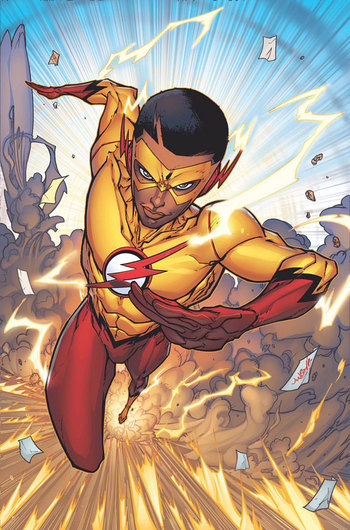 "I've been given a shot — the opportunity to be great, super — and I'm not going to screw this up."

Appearing after Flashpoint as a biproduct of changes to the timeline, Wallace is the mixed-race nephew of Iris West. Wallace's father, Daniel West (Iris' younger brother), abandoned him and his mother shortly after he was born. Wallace was raised to believe that Rudy West was his father, and that his "uncle" Daniel was just checking up on him. Wallace grew up to become a delinquent, and Iris requested for Barry to take him under his wing so that he could finally have a father-figure in his life. Wallace is the cousin of Wally West, both named after their great-grandfather.

When a future incarnation of Wallace travels to the past to fight an evil future version of Barry, Wallace winds up imbued with a part of his future self's powers, albeit in an unstable way. Initially keeping his powers secret, when a Speed Force storm hit Central City, Wallace was connected to the Speed Force in full and assisted the Flash in defeating the villain Godspeed. This saw Wallace become the third Kid Flash, and adopt the Flash as his mentor. During this time, Wallace would be kidnapped by Damian Wayne to join the new Teen Titans. The team does eventually form under Damian's leadership.

Wallace would eventually learn that Daniel West is his father and was the third Reverse-Flash, knowledge that makes Wallace doubt his self-worth. Also learning that Barry Allen is the Flash, Wallace's faith is shaken and, seeking a father figure, he briefly bonds with Slade Wilson. Wallace went on to join Deathstroke's new team of superheroes, Defiance, although secretly acting as The Mole along with Tanya Spears. After the dissolution of Deathstroke's team, Wallace returned to the Teen Titans and developed a relationship with Emiko Queen. Wallace would also return to Central City, reconciling with Barry, meeting his older cousin and developing a partnership with Avery Ho, the Flash of China. After Damian's team disbands and Barry leaves to explore the multiverse, Wallace becomes a student at Teen Titans Academy alongside what remained of his team. He eventually began being mentored by his cousin Wally, whose trolling antics force Wallace to step up as Wally's partner.

The Flash of China / The Flash V

The Flash of China / The Flash V 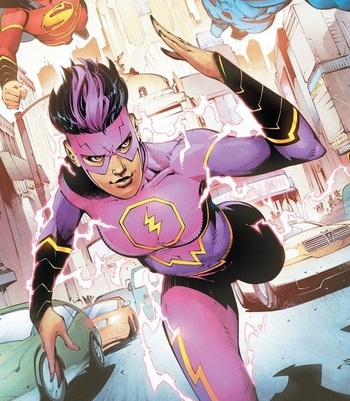 "You got all those fancy Superman powers like X-ray vision and super-strength. All I do is run. You really think you can beat me at my one thing?"

When a Speed Force storm hit Central City, Avery was one of the citizens granted superspeed. Initially baring an unstable, incomplete connection to the Speed Force, she was unable to stop vibrating. With the assistance of the Barry Allen, she managed to stop and later began her training under Meena Dawhan. However, she reluctantly gave up her powers so that the Speed Force could be made whole again. Unbeknownst to Barry and Meena, Avery actually gained a full connection to the Speed Force after it was made whole. With this power, she found herself working with the China White Triad against Lex Luthor before moving to China, where she was dubbed the Flash of China and joined the Justice League of China.

Avery eventually returns to Central City, just in time to fight Grodd and Blackhole, as well as meet Wally West. She would form a partnership with Wallace West and work closer under Barry Allen, before Barry left to join Justice League Incarnate. After Barry's disappearance, Avery was his first choice as his replacement, so Avery is recruited onto Justice Incarnate to help find her mentor. While on the team, Avery officially becomes the fifth Flash.