Characters / The Flash  Other Speedsters

Currently active characters and their codenames are in bold.

These are speedsters who, even if related to a Flash somehow, are not "officially" in the Flash family in modern times. 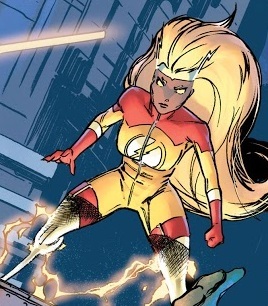 An aboriginal Australian teenage girl with superspeed, Alinta's one of the first students of the Teen Titans Academy. She's also a double amputee missing her legs below the knee, requiring her to wear prosthetics. Her codename is related to the fact she can only use bursts of Speed Force energy.

In a possible future, she is forced to become the Flash for Amanda Waller's "Justice Squad" on Earth-3. 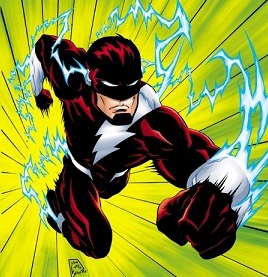 Walter West is an alternate universe version of the Flash (Wally West). Walter West's life paralleled that of Wally West until the battle with Kobra which costs Linda Park's life. Walter was not able to save his Linda unlike Wally. Driven mad with grief at her loss, Walter embarked on a life of brutal enforcement against criminals crippling many until he encounters Wally and his Linda. Believing them dead, he travelled to their timeline to take Wally’s place, both as the Twin Cities' protector and on the Titans.

The Flash of Earth 2 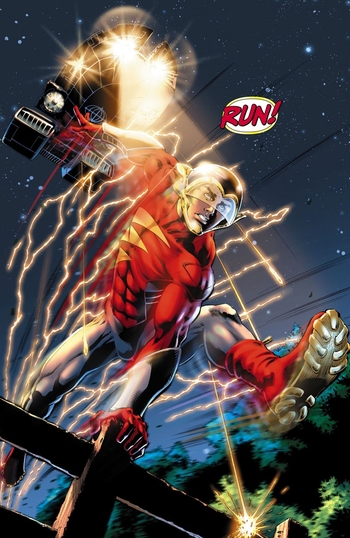 Jay Garrick was a college graduate who didn't know what to do with his life. His scores were average and his longtime girlfriend Joan left him to pursue larger things. One night, while pondering his future, the god Mercury crashed nearby. Mercury gave Jay his speed before dying. Together with Alan Scott and Kendra Munoz-Saunders, they signified a new age of Wonders.

Initially an updating of the original Jay Garrick, Rebirth revealed that the original does exist, making this Jay a separate character entirely.

The forgotten daughter of Jay and Joan Garrick, erased from everyone's memories for decades. Judy Garrick, a.k.a. "The Boom," would travel back in team from 1963 to have adventures with her father in the 1940s. She developed a quirky friendship with the Tortoise, the awkward son of the Turtle. Judy stopped teaming up with her dad in 1949, the year she was chronologically born.

She's since been held captive alongside nearly a dozen other teen and kid sidekicks of Golden Age heroes on an island controlled by someone known as "The Childminder." 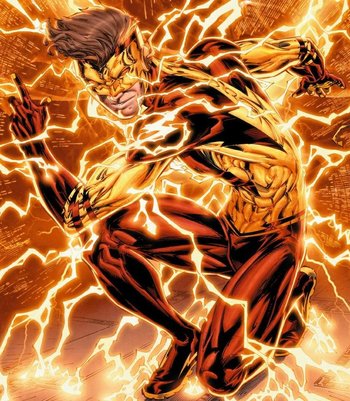 In the early 21st Century, Bart Allen used his super-speed as the hero Kid Flash, one of the members of the Teen Titans. He initially had no memories and only recalled his name. In actuality, his name is Bar Torr and he's from the 31st Century, and he was sent back as a form of witness protection after helping stop a rebellion he started. While he uses the name Kid Flash, he's not associated with the Flash Family and isn't powered by the Speed Force. Not only that, but he doesn't even like the Flash. 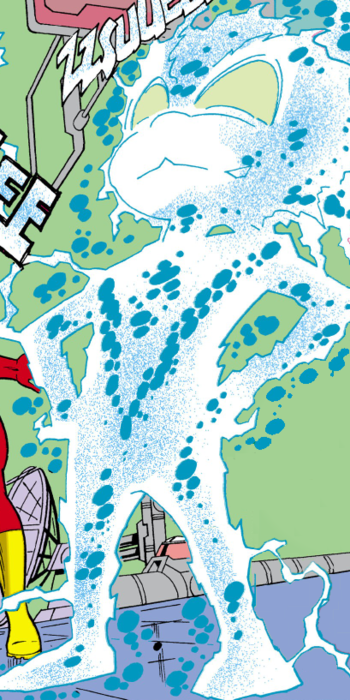 Wally's imaginary friend from his childhood, who turns out to be a real extra dimensional being from a dimension called Kwyzz, and a speedster as well. 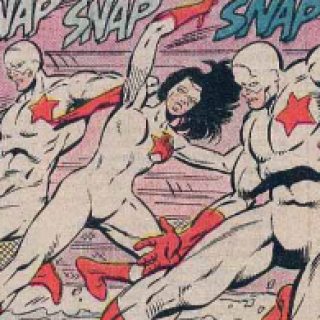 A trio of speedsters created by the Russian scientist Dr. Pytor Orloff, the Red Trinity defected with the doctor to the US, where they became a for-hire group called Kapitalist Kouriers. 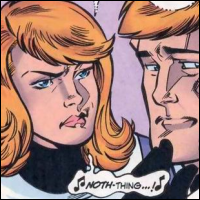 Barry Allen's children from the 30th century (long story) who gained superspeed from their father. They're inspired to become heroes of the 30th century by Wally during one of his trips into the future. Don would later marry Meloni Thawne and father Bart Allen (Impulse/Kid Flash II/The Flash IV), while Dawn would marry Jeven Ognats and give birth to Jenni Ognats (XS).

These are speedsters who are either descendants of Wally West or Barry Allen (except John Fox who is neither) who have taken up and passed on the Flash mantle.
Tropes Common to All of Them
The Flash of the 23rd Century

Not much is known about him except that through time travel, he is friends with Johnny Quick. In addition, he was forced to watch Cobalt Blue kill his wife and cripple his daughter Sela and slow the electrical impulses in her brain. Sela's father took her to the Speed Force in hopes of returning her to normal. Eight months later, he beats Cobalt Blue to death out revenge. He is killed by a child possessed by the Cobalt Blue gem.

The Flash of the 23rd Century II

Sela as The Flash

Sela before her transformation

Sela was originally an ordinary girl who despite having The Flash as a father, lacked super speed. Then Cobalt Blue killed her mother and broke her spine and slowed down her nervous system, forcing her father to watch. Desperate to save her, her father takes her to the Speed Force which turns her into a conscious manifestation of the Speed Force. She becomes The Flash after the death of her father and assists the Flash Family in the fight against the first Cobalt Blue and his descendants.

The Flash of the 27th Century 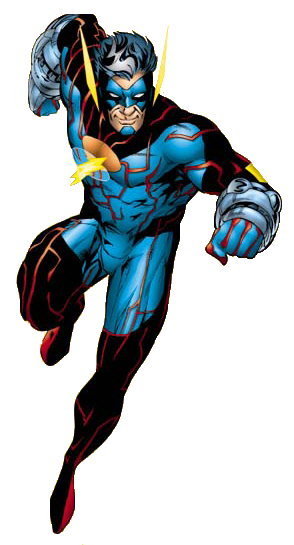 A historian from the 27th century. When a supervillain attacks his home city, he is sent back in time to get the assistance of a Flash to help combat the problem. While the time travel didn't work, it did end up granting him superspeed, and he stopped the villain. He took up the identity of the Flash, dyed his hair to protect his identity, but was soon made into a glorified guard dog. However, after spending some time as a hero in the 20th century, temporarily taking the place of Wally West, he returns to the future. He later journeys to the 853rd century, where he is a member of the Justice Legion Alpha.

The Flash of the 28th Century 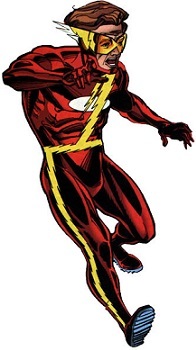 The Flash of the colony world Petrus, a micro-planet in the Massara System.

The Flash of the 28th Century

Jace Allen is the son of Blaine Allen from the colony micro-planet Petrus. He did not possess super speed until the Speed Force granted him super speed in 2754. He took up the Flash mantel in memory of his father.

The Flash of the 40th Century 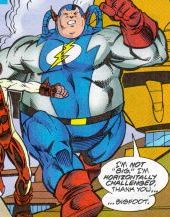 A fifth generation Jupiter colonist. While he does possess super-speed, his very large girth (due to Jupiter's gravity being greater than of Earth's) slows him down.

The Flash of the 67th Century

Not much is known except that he will be an ally of the 67th century's Superman, Wonder Woman, Aquaman, and others.