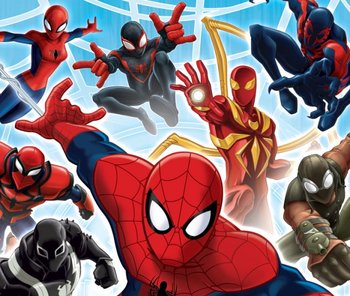 Doing whatever an army of spiders can.
Advertisement:

A Super Team, Five-Man Band, Badass Crew or Badass Army where everyone on the team has the exact same powers or abilities, by and large. Often times, The Chosen Many will also be given similar abilities.

However, this does not include:

With some abilities, this makes it easy to have an All Your Powers Combined moment, since all they need to do is focus their identical powers on the same target at the same time. On the other hand, this may lead to Crippling Overspecialization. Sometimes, this is done to make sure everyone on the team is equal, without relying upon a Plot Tailored to the Party. It can also allow writers to focus on characterization to differentiate each teammate rather than rely on their powers to do it.

See I Believe I Can Fly, for when every member of a team can fly. Compare Superhero Team Uniform and contrast Cast Speciation and Superhero Speciation. Can easily overlap with Alliance of Alternates, although it's also possible for members of such a group to be identical except for their powers.