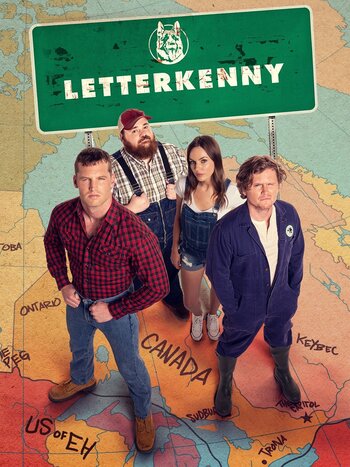 A Troper came up the Produce Stand the other daaaay...
There is a small town of 5000 people in midwestern Ontario called Letterkenny. It consists of hicks, skids, hockey players, and Christians.
These are their problems.
Advertisement:

Letterkenny is a Canadian Sitcom written by Jared Keeso and Jacob Tierney, and starring Jared Keeso and Nate Dales. It began as a series of web videos called "Letterkenny Problems" where Keeso and Dales played a pair of good ol' boys from the small town of Letterkenny, Ontario who list off their daily problems. They later produced a few sketch videos.

In 2015, domestic streaming service Crave announced that they were developing a full sitcom from the series as their first original program. The series expands the focus to the daily lives of Letterkenny's residents including:

Eventually Stewart begins to try and rekindle a romance he had with Katy in high school, and his plans begin inciting old grudges between all the town's groups. Hilarity Ensues.

The above is the setup for Season 1. Season 2 and onward would continue to adjust the status quo accordingly to accomodate the change of seasons (i.e. fall, winter, etc..., as well as TV seasons), relationships, and both new and old characters. The skids would be the first group to encounter a major change in the departure of Devon (Alexander De Jordy) after Season 2. The main cast has remanined largely consistent since then.

The new series premiered in 2016 and was met with rave reviews. A second season was announced shortly after the show premiered, and premiered Christmas Day 2016. Season 10 is due for release on Christmas Day, 2021, and season 11 is in production. It's been estimated that nearly one in three CraveTV users watches the show.

The original videos can be found on their YouTube channel here

, with promos for the television show available on Crave's channel here

"It's a hard life pickin' stones and pullin' teats but sure as God's got sandals it beats fightin' dudes with treasure trails."