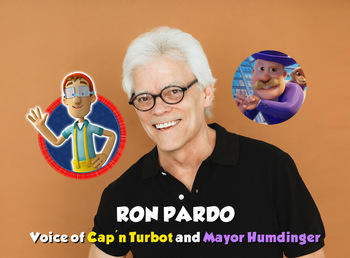 Ron Pardo (born May 15, 1967) is a Canadian-born teacher turned voice actor/comedian known largely for his voice range, he has provided voice work for dozens of cartoons and anime. He has also done on-camera work, mainly on History Bites, where he was one of the main cast members.
Advertisement:

He's probably best known as the voice actor for both Cap'n Turbot and Mayor Humdinger on PAW Patrol (both roles that he reprised in the show's 2021 film adaptation), but some might also remember him for appearing in major roles on other Canadian cartoons like Marvin the Tap-Dancing Horse, World of Quest, and Sidekick, as well as the English dub of Bakugan. Incidentally, like in PAW Patrol, Pardo voices two major characters in both Marvin the Tap-Dancing Horse and World of Quest, being the title character and Stripes the Tiger in the former and Quest and Graer in the latter.

Interesting fact: Pardoville, Ontario, the hometown he grew up in was named after his ancestors.

Not to be confused with the late Don Pardo, the longtime announcer of Saturday Night Live.