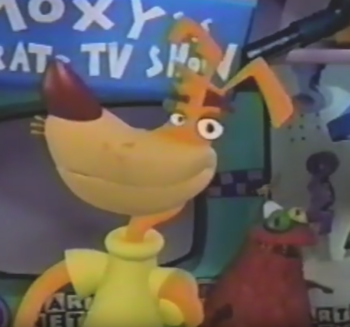 Question: What was the first Cartoon Network original series? A lot of animation fans would probably say Dexter's Laboratory. Others may be more clever and point at What A Cartoon! Show, the anthology series from which Dexter's Lab and many of the network's early Cartoon Cartoons originated. And still others will have done a bit more homework and point to Space Ghost Coast to Coast as the network's first original series. All those people would be wrong. note Well, the people who said Coast to Coast technically aren't. That was the first fully-produced original series, while here we're talking interstitials in the vein of future programming blocks such as Toonami or Cartoon Cartoon Fridays.

Premiering in 1993, The Moxy Show was Cartoon Network's first-ever original series. Initially known as The Moxy Pirate Show, it was a collection of classic Hanna-Barbera cartoons with CGI-animated interstitials placed in-between, starring Moxy the dog and his friend Flea. The show originally only featured Moxy and was entitled The Moxy Pirate Show; Flea wasn't added until 1994, with the show gaining its new name of The Moxy Show upon his debut appearance.

In 1995, the final episode was produced, with this episode being an intended pilot episode for another iteration of the series, The Moxy & Flea Show. This new show was never greenlit for its own series due to poor reception.

If you're sitting here wondering why you've never heard of this cartoon before an hours-long dive into TV Tropes or that one cameo from an episode of OK K.O.! Let's Be Heroes, it's because The Moxy Show is one of the biggest examples of lost media that Cartoon Network has to offer. The series never saw reruns after Boomerang was spun off into its own network in 2000, and no form of home media containing any part of the show was ever released. Only segments of an assumed 24 episodes have been found, leaving Moxy and Flea as the most forgotten characters in the channel's stable.