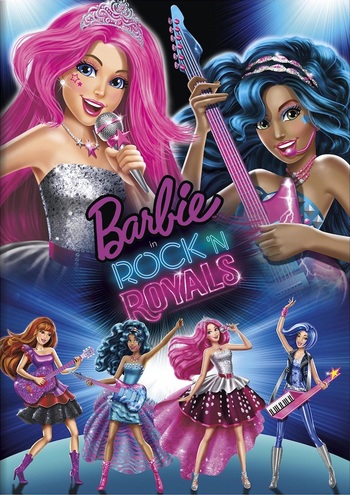 Barbie in Rock 'n Royals is a Barbie movie released in August 2015. It is preceded by Barbie in Princess Power and followed by Barbie & Her Sisters in the Great Puppy Adventure.

Barbie stars as Princess Courtney, a modern princess whose world is turned upside down when she switches places with Erika, a famous rock star. Two very different worlds collide when a mix-up sends Princess Courtney to Camp Pop and Erika, to Camp Royalty. While the leaders of the rival camps try to correct the mix-up, both Courtney and Erika learn to adjust to the different worlds and have fun while making new, unexpected friends. When the girls learn both camps are at risk of shutting down, they must embrace their differences, find their true voices, and come together for an epic sing-off that shows anything is possible when you dare to dream big.

Rock your own story.
— Barbie
Feedback

Sloane and her two friends Hallie and Dua mock Courtney and call her "Cinderella" as a slur.

Sloane and her two friends Hallie and Dua mock Courtney and call her "Cinderella" as a slur.