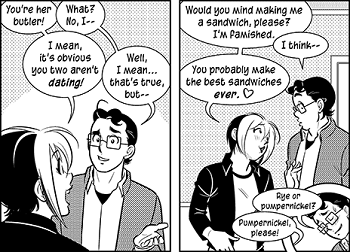 ... One never knows what mistakes may arise when one looks so like a waiter.
"Oh, hang it all!" said the young man, "a gentleman never looks like a waiter."
"Nor a waiter like a gentleman, I suppose," said Colonel Pound, with the same lowering laughter on his face.
"Reverend sir, your friend must have been very smart to act the gentleman."
Father Brown buttoned up his commonplace overcoat to the neck, for the night was stormy, and took his commonplace umbrella from the stand.
"Yes," he said; "it must be very hard work to be a gentleman; but, do you know, I have sometimes thought that it may be almost as laborious to be a waiter."
— Father Brown, "The Queer Steps"
Advertisement:

Ah, it's a beautiful day - you won an all-expense-paid trip to the Schwing-Ding Five-Star hotel! Aren't you excited?

Odd how the Bellhops are wearing the same type of shirt as you do. Oh look, it's Lady Drunk coming right over - gee they're so -

Oh? She wants you to walk her dog? Groom it? And there she goes, leaving the annoying yappy thing in your hands before your mouth could form around "Wait, I'm not...?".

Congrats, you just got mistaken for the hired help!

This is an almost-anytime, anywhere trope that can be Played for Laughs or could more rarely be used in more serious works. This tends to play out in four ways:

Notably, especially in older (mainly American) works, ethnicity is sometimes a factor in whether or not someone is mistaken for the hired help. If used in more modern works, is generally used to indicate that the character making the mistake is either bigoted or, more kindly, behind the times.

Can often be followed by Actually, I Am Him moment. Actually, That's My Assistant is similar, but it refers to a situation where more than two characters are involved: the mistaker doesn't think someone is their servant, but confuses who's who in a lower/higher rank pair.

can attest, some people are unfortunately stupid enough for this to be Truth in Television. Fortunately, they don't tend to be as stubborn as the sort of lunatics featured in the subreddit stories.