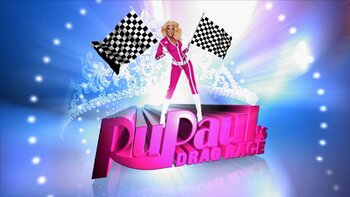 "Racers, start your engines! And may the best drag queen win!"
"Good luck, and don't fuck it up!"
Advertisement:

RuPaul's Drag Race is a reality show in which a group of talented drag queens compete in challenges to impress host RuPaul, the world's most famous drag queen, in order to win a cash prize along with a crown and the title of "America's Next Drag Superstar". It originally aired on LOGO from 2009 to 2016, and then moved to VH1 in 2017.

The bulk of each episode consists of a main challenge, usually some form of performance or fashion design, sometimes both. Then the queens participate in a themed runway show, where one is declared the winner of that week, while two others are announced to be up for elimination. The bottom two must then compete to stay on the show with a lip sync for their lives. These tend to result in wigs falling off, jumping splits, death drops, and the occasional kiss. Sometimes both queens survive the lip sync, but sometimes neither are saved. There was once even a six-way lip sync when one team performed especially bad as a unit. RuPaul's decisions are helped by a judge panel, with its current iteration made up of Michelle Visage, Ross Mathews, and Carson Kressley (who alternate on the third judge seat), and celebrity guest judges.

There have been thirteen regular seasons of the show, with the 14th season currently being broadcast in early 2022. There have also been six seasons of RuPaul's Drag Race All Stars where returning queens compete for the distinction of being inducted into the "Drag Race Hall of Fame". Additionally, an inaugural RuPaul's Secret Celebrity Drag Race edition premiered in 2020, featuring Drag Race alumnae putting celebrities into drag to compete in some of the show's iconic challenges for charity. A list and summary of all seasons can be found on the Recap page.

The show has helped to bring Drag into mainstream pop culture. Regardless of how well a contestant does in the competition, most of the queens have found success and a dedicated fanbase after their season.

The VH1 YouTube channel has two web shows to tie in with its broadcast of Drag Race:The WOWPresents

channel on Youtube (and its own dedicated streaming service, WOW Presents+) produce official web shows starring Drag Race queens. Long time staples of the service are:note Entries in bold indicate shows that are still being made.Many other queens have short shows where they talk various topics to viewers in the same vein as Alyssa, Trixie, and Katya:And there are several original series on the WOW Presents+ platform:
Drag Race-related projects
Miscellaeous projects related to (but not officially part of) the Drag Race franchise include:

Drag Race alumni with their own pages on this wiki include:
Recurring Drag Race challenges