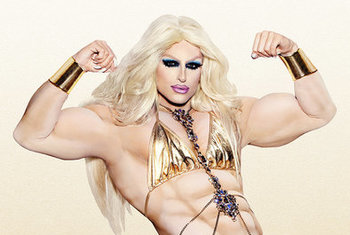 "Milk — she does a body good, guuurl!"
Advertisement:

Milk is best known for competing as a contestant on the sixth season of RuPaul's Drag Race in 2014, where she finished ninth place. Though Milk didn't last as long as some of her fellow queens in the competition, she gained a sizable following for her unique brand of drag, personality, and her good looks in and out of drag. Because of this, she returned to the show for its third all-stars season in 2018.

Prior to starting drag, Milk was an athlete on the competitive figure skating circuit. In addition to doing drag, she is also a professional model, booking campaigns from designers among the likes of Marc Jacobs (whom she actually used to work for) and Madonna, mostly modeling out of drag as Dan Donigan.