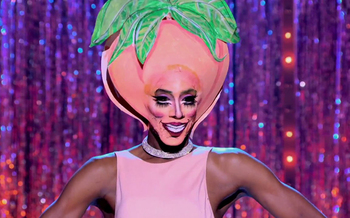 They became known internationally after their appearance on the ninth season of RuPaul's Drag Race where they placed sixth overall. Brown is known for their creative and unique make-up looks, often using unconventional materials such as paper in their drag looks. After winning the first main challenge of the season and being praised by Lady Gaga for her talent, Brown became a fan favourite through the seasons run. Despite this, Brown's habit of putting herself down and being her own worst enemy eventually got the better of her. Perhaps her most famous moment in the show is during the season's fifth episode where the queens are tasked with a "Rusical" focusing on the Kardashians. Brown was not given the role of Blac Chyna and voiced her thoughts openly. The moment has been called back in later seasons as well as being a meme online since.

Brown is also known for their popular YouTube channel with the series, Rawview where she reviews the latest episodes of RuPaul's Drag Race, giving unfiltered and sometimes controversial opinions. Brown has also appeared in advertising campaigns for MAC Cosmetics (for their Aaliyah collection) in 2018 as well as in Paper Magazine, dressed as a humanoid zebra.

Nina Bonina Brown provides examples of the below tropes: