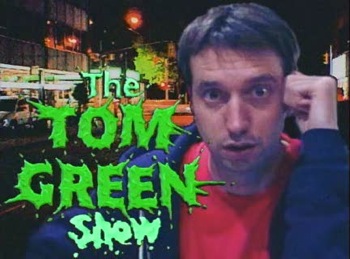 The Tom Green Show was a sketch comedy show, hosted by none other than Tom Green, a former stand-up comic, and a member of Canadian rap group Organized Rhyme. During the show, he is usually accompanied by two of his long-time friends: Glenn Humplik, his old friend from working in radio, who occupied the couch, and Phil Giroux, whose sole purpose was to sit in the window with a cup of coffee and laugh at random jokes. After a pilot was produced to sell to CBC, it eventually wound up debuting on The Comedy Network in Canada, where it ran for two seasons.

Within those two seasons, Tom Green became a notorious figure in Canada, whose brand of shock humor, surrealist humor and street comedy wound up disturbing many grown-ups while developing a cult following among teenagers and young adults alike. One particular headline-making incident involved Tom showing up on a late night talk show, Open Mike With Mike Bullard, and presenting Bullard with his show's mascot, Racky the Raccoon

(a dead raccoon he found and kept for months).

Tom's following got significant enough that he was soon picked up by an American network, MTV, which gave Tom much more exposure and another three seasons, where America became hip to his unique brand of madness. At the height of his fame, Tom even released a song free on his website entitled "The Bum Bum Song,

" which went straight to #1 on Total Request Live (which Tom himself personally retired no sooner then it did stating he "wanted to be fair to the other artists"- though it was actually because TRL was hosting that specific week pretaped on location and was apparently unaware of the song's popularity, and, understandably aware of how embarrassing that would be for the show, asked him personally to "retire" the song). Tom wasn't above lampooning his own public image - for instance, he did one show in Canada with Monica Lewinsky, fresh off the heels of her scandal with then-president Bill Clinton. It sounds like a recipe for outrageousness, but the show promptly wound up centered around Monica's interest in handbags.

This incarnation of the show ended with a one-hour special devoted to Tom Green's sudden diagnosis with testicular cancer, and subsequent surgery, a much more sobering approach than fans were used to from Tom. The show halted production after that, but it returned in 2003 as The New Tom Green Show. Armed with a late-night talk show format, it lasted several weeks before being cancelled by MTV, since it wasn't the direction the network wanted to go in. Tom went on to host a talk show in his basement entitled Tom Green's House Tonight, and currently tours as a stand-up comic.

Tom Green, and this show, is often remembered as one of the more grotesque footnotes of The '90s, and it doesn't help that Jackass debuted and succeeded Tom Green as the next big thing in shock humor. The Tom Green Show show was #41 on TV Guide's 50 Worst TV Shows of All Time. And on top of that was his poorly-received feature film which he directed and starred in, the infamous Freddy Got Fingered (which, like The Tom Green Show, is still a Cult Classic in some circles). Yet Tom Green still has lots of supporters out there to this day, who hail him as an early example of a Troll, and he's better remembered in his native Canada than elsewhere. You might still find him showing up in odd places - for example, in 2020, he was a guest judge on Canada's Drag Race, of all shows.