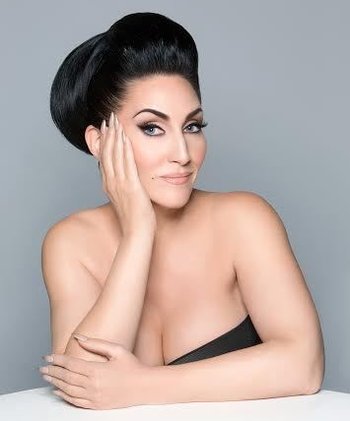 Visage began her career as a member of the girl group Seduction, whose single "Two to Make It Right" (featuring lead vocals from Visage) reached #2 on the Billboard Hot 100 chart in 1990. Following their separation, Visage joined freestyle dance group S.O.U.L. S.Y.S.T.E.M., whose song "It's Gonna Be a Lovely Day" was featured on the soundtrack note Track 9! to Whitney Houston's The Bodyguard. She likes reminding people of this.

Despite her initial focus in singing, Visage is perhaps best known as a media personality, co-hosting shows on radio and television. She has been a main judge on LOGO's Ru Pauls Drag Race since its third season in 2011, working alongside longtime friend RuPaul, with whom she previously co-hosted The RuPaul Show on VH1 from 1996 to 1998.

In 2015, she became a contestant on Channel Five's Celebrity Big Brother, where she finished in fifth place. That same year, she also published her first book of personal essays, The Diva Rules.

She provides examples of the following tropes: