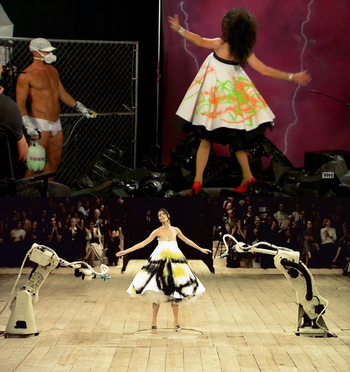 When RuPaul's Drag Race started out, it was a bit... different from most other reality shows. Aside from the subject matter, portraying drag queens in a realistic light, which even in 2009 was controversial, the entire presentation was different than what other reality shows did. Slang terms exclusive to gay and drag queen communities were being said on TV for the first time, RuPaul was constantly joking with the contestants and having fun on the show, and the show was willing to break its own format for the sake of a joke. In its earlier seasons, drag race was more a parody of reality shows that an honest reality show itself. A part of this meant lots and lots of references to almost every aspect of gay culture. Even in more recent years, as the show has somewhat mellowed out, it continues to be borderline Reference Overdosed with the number of shout outs made in the average episode.

This is a page to catalog the many, many references made throughout Drag Race's lifetime.