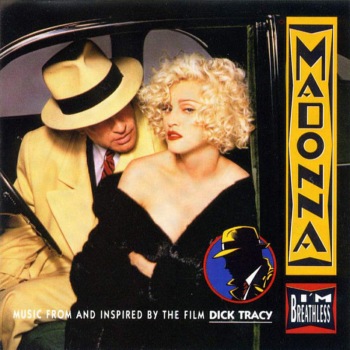 Don’t just stand there, let’s get to it
Strike a pose, there’s nothing to it
Advertisement:

I'm Breathless is the soundtrack album created for the 1990 film Dick Tracy. It was released through Sire Records on May 22, 1990.

The album was co-produced and recorded by Madonna, who also co-starred in the film. It features the hits "Vogue" and "Hanky Panky". Actually, only three of the songs from the album — "Sooner Or Later", "More", and "What Can You Lose" — were ever really used in the film, with "Now I'm Following You" re-recorded by a different artist.note "Back in Business" shares its name with a song from the film, but has a completely different tune and lyrics. Also, "Vogue" was originally intended to be a B-side to Madonna's "Keep It Together" single from Like a Prayer, but executives thought that it was too good a song to be wasted as a B-side and instead released it as a single prior to the album's release.

I'm Breathless would sell seven million copies worldwide, being certified Double-Platinum by the RIAA. "Vogue" would reach #1 on the Billboard Hot 100 (her eighth) and the UK pop chart (her seventh).

Strike a trope! There's nothing to it!