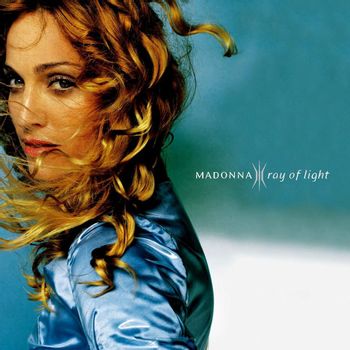 You were my lesson I had to learn
I was your fortress you had to burn
Pain is a warning that something's wrong
I pray to God that it won't be long
Do you wanna go higher?
"The Power of Goodbye"
Advertisement:

Ray of Light is the seventh studio album recorded by American pop musician Madonna. It was released through Maverick Records on February 22, 1998.

"Frozen" was banned in Belgium from 2005 until 2014 because it was supposedly Plagiarism from a song by Salvatore Acquaviva, but this sentence was eventually overturned.

Spawned hits such as "Ray of Light" and "Frozen". It was also the first record where she referenced Kabbala mysticism. It is notably only her third non-soundtrack album up until American Life that didn't contain a #1 US hit single — "Frozen" stalled at #2 behind K-Ci and Jojo's "I'll Remember". In the UK, in contrast, "Frozen" became Madonna's first #1 single since 1990's "Vogue", kickstarting a run of five straight Top 10s from the album and a renewed streak of chart-topping success into the new millennium.