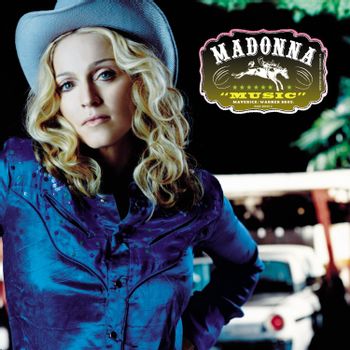 Hey, Mr. DJ, put a record on
I wanna dance with my baby
Tell the leaves not to turn
But don't ever tell me I'll learn, no, no
Take the black off a crow
But don't tell me I have to go
Tell the bed not to lay
Like the open mouth of a grave, yeah
Not to stare up at me
Like a calf down on its knees

Tell me love isn't true
It's just something that we do
Tell me everything I'm not
But don't ever tell me to stop
—"Don't Tell Me"
Advertisement:

Music is the eighth studio album recorded by American pop musician Madonna. It was released through Maverick Records on September 18, 2000.

It contains the hits "Music", "Don't Tell Me", and "What It Feels Like for a Girl". It was the follow-up to the hugely successful Ray of Light.

But secretly, you'd love to know what it's like for tropes: