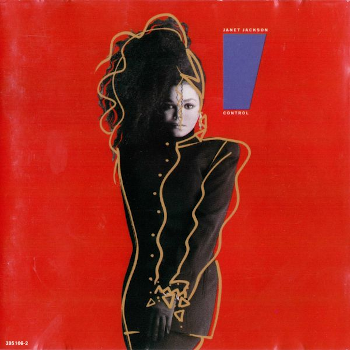 When I was seventeen, I did what people told me
Did what my father said and let my mother mold me
But that was a long ago
Hey take a ride in a big yellow taxi
I'm not here to feed your insecurities
I wanted you to love me
This has become an all too familiar scene
It's not the first time I've paid the fare
Where'd you get the idea of material possession?
Thank you for the ride nowhere
And oh my meter's running, so I really have to go.
—"The Pleasure Principle"
Advertisement:

Control is the third studio album from American R&B singer Janet Jackson. It was released by A&M Records on February 4, 1986.

After several years of professional and familial turmoil, two prior albums flopping,note Both her self-titled debut and "Dream Street" failed to sell 500k records worldwide, didn't earn her any record certifications, and yielded no pop hits. and a recent annulment of her marriage to James DeBarge, Janet finally fired her father, Joseph, as her manager. She conferred with A&M's resident A&R John McCain, who then subsequently linked her with former The Time members James "Jimmy Jam" Harris III and Terry Lewis, also known collectively as Flyte Tyme. Temporarily relocating to Flyte Tyme's native Minneapolis, mainly to prevent her father from running interference, Janet spent the first week with the producers getting to know them on a personal level, partially so they'd know what songs would fit her best.

Although most of Control's material was already previously written for another singer that rejected the songs for being "rambunctious," Janet offered her input on the lyrics and production. As a result, much of the album is heavily autobiographical in nature. For instance, "What Have You Done For Me Lately" was re-written to convey her emotions about her split from James DeBarge, while the title track dealt with Janet's emancipation from her father's overbearing management, and wanting to take control of both her music career, and her life in general. Meanwhile, Flyte Tyme crafted the album's production with their former boss' trademark "Minneapolis Sound," adding in some extra Hip-Hop influence to appeal to the urban community, while also aiming for crossover pop success.

Good ol' Joseph ranted and raved against the album's material, claiming it wouldn't sell. At one point, he proclaimed, "If Janet listens to me, she'll be as big as Michael."

As time would tell, she didn't need Joseph at all. Control was Janet's declaration of independence. And it served its purpose well.

Regarded as Jackson's breakout album, Control was critically and commercially successful, becoming her first chart topper on both the Billboard 200 and the R&B charts. Critics praised both the album's innovative production, and Jackson successfully breaking out of her family's shadow by making herself stand out on the album. Control was eventually certified six-times Platinum in the US, and sold over 10 million copies worldwide. Since then, Janet has worked with Jam & Lewis almost exclusively, with 2008's Discipline being the lone post-Control album that didn't feature their work.

It produced seven singles: "What Have You Done For Me Lately", "Nasty", "When I Think of You", the Title Track, "Let's Wait a While", "The Pleasure Principle", and "Funny How Time Flies (When You're Having Fun)". The first five were all Top-5 hits on the Billboard Hot 100, with "When I Think of You" becoming Janet's first #1 single. Five of them were also hits in the UK, with three going Top 10 there.

The album, particularly the tracks "Nasty" and "What Have You Done For Me lately", is frequently cited as the early blueprint of the New Jack Swing fusion genre, which further blended the sound of New York City hip hop with the Minneapolis Sound; culminating in Keith Sweat's Teddy Riley-produced debut Make It Last Forever being released the year after Jackson's Control.

The album won Flyte Tyme a Grammy Award for Producer of the Year, Non-Classical, in 1987. Several of the associated music videos earned her praise for their choreography, particularly "Nasty", which was choreographed along with rising choreographer and future music star Paula Abdul. "Nasty" (1987) and "The Pleasure Principle" (1988) won Janet Best Choreography in consecutive years at the MTV Video Music Awards. She also dominated the Best Music Video category at both the American and Soul Train Music Awards in both years.

* = "Start Anew" was originally recorded in 1985 for a Japanese VHS commercial, and was included on early Japanese pressings of Control as the fifth track. It's one of the few tracks not written or produced by Janet or Flyte Tyme.