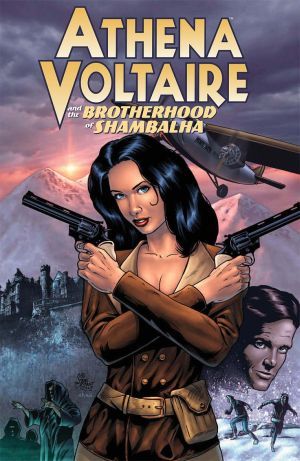 Athena Voltaire is a series of comics centred on a 1930s aviatrix with a side line in fending off the occult and thwarting Nazis. It was initially written by Steve Bryant and Paul Daly, and drawn by Bryant; Daly later left.

Athena Voltaire has had a complicated publication history. It originally launched in 2002 as a webcomic, but later shifted to print with a series called Flight of the Falcon (published in 2006). That was followed by a print collection of the webcomics. Later, in 2015, reworked, expanded, and renamed versions of the existing stories were released in the Athena Voltaire Compendium. Two more stand-alone stories followed. In 2018, an ongoing series began, written by Bryant and drawn by Ismael Canales.

As it currently stands, the Athena Voltaire canon can probably be said to consist of the following: