Webcomic / Beyond the Western Deep 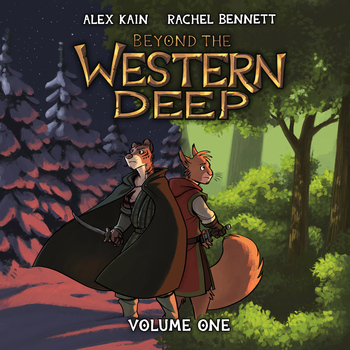 It's a dangerous business, going out your door.
"After countless years of war, it seemed as if civilization would take root. We hoped for a new era of knowlege and understanding. Yet despite all our progress, a single life, a single breath, a single thought, would destroy everything..."

On the continent of Dunia sits four kingdoms: Sunsgrove, Aisling, Navran, and Kishar. Forged from ages of strife and bloodshed, and held together under the terms of the Treaty of Cenolau, their rulers and subjects have managed to maintain a fragile peace—until now.

The Ermehn, a people exiled to the Northern Wastes by the Canid of Aisling, have begun to unite under the Sratha-din—Bevan, Rhosyn, Ashtor, Eira and Rathik—led by Hardin, who desires to right the wrongs his people have suffered. Further south, Quinlan and Dakkan, warriors of the combined Tamian-Lutren kingdom of Sunsgrove, are summoned by the Tamian king to serve as envoys to the Canid under Dakkan's father, Kenosh, their destination the military garrison of Deltrada where General Clovis is preparing to make war against the Ermehn. Meanwhile, Quinlan's friend Janik has been asked to serve as assistant Tamian ambassador to the Vulpin of Navran at their capital in Nessa. Quinlan and Dakkan are unaware Hardin has chosen Deltrada for his first strike against the Canid, or that Kenosh has developed a rapport with the Ermehn through his service during the Oran Uprising several years ago, when the Ermehn tried unsuccessfully to take their lands back. Unknowingly, they are headed toward a reckoning years in the making.

Got all that? Now, picture them as stoats, wolves, squirrels, and otters.

Beyond the Western Deep is a Low Fantasy Funny Animal webcomic by Alex Kain and Rachel Bennett in the vein of Redwall and Usagi Yojimbo, following the characters' adventures and trials as they attempt to weather the encroaching conflict. Tough decisions and harrowing moments abound, with Quinlan and Dakkan trying to do their duty despite lacking valuable experience, Hardin determined to restore his downtrodden people to their rightful lands no matter the cost, and Kenosh and Janik doing their best to maintain peace diplomatically. As events progress and hidden pasts come to light, the web of relationships between them all, as well as the complexities of the treaty that binds the Four Kingdoms, will either lead to the prevention of war... or the destruction of Dunia's fragile civilizations one by one.

Due to both the comic's writer and artist having day jobs, a few alternate stories and Worldbuilding asides occasionally take center stage, including:

These additions have helped the comic mostly avoid Schedule Slip, and with their inclusion in the page count it has amassed roughly seven chapters in a little under ten years since its launch in December of 2011. The comic, which updates every Saturday, can be found here

Beyond the Western Deep and its side stories provides examples of: