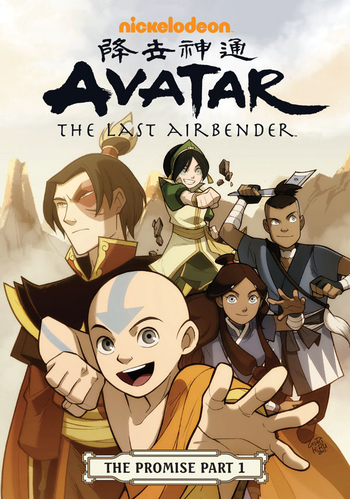 Aang is about to shoot elements at you.
Advertisement:

A trilogy of Graphic Novel digests published by Dark Horse Comics in the Avatar franchise, acting as an Interquel between Avatar: The Last Airbender and its Sequel Series, The Legend of Korra. The story is written by Gene Luen Yang (American Born Chinese) with input from series' creators Michael Dante DiMartino and Bryan Konietzko, with illustrations by Japanese art duo Gurihiru.

With Ozai defeated and the war over, Team Avatar and the world's governments set to work restoring balance to the world. Zuko, worried that he might go mad with power like his father, makes Aang promise to kill him should he ever become a threat. One year later, a dispute breaks out over the Fire Nation colonies in the Earth Kingdom, and war may break out yet again. Worse yet, Zuko is taking the colonies' side, making the conflict worse and forcing Aang to accept that he may have to fulfill that promise after all.

The first volume was released on January 25, 2012, the second on May 30, and the third on October 9, with a hardcover compilation of the trilogy released February 20, 2013. A second comic series by the same creative team subtitled The Search began in March 2013, detailing Aang and Zuko's search for Zuko's Missing Mom while dealing with Azula, whose discharge from mental care Zuko has ordered so she may aid in the eponymous search.

The Promise provides examples of: