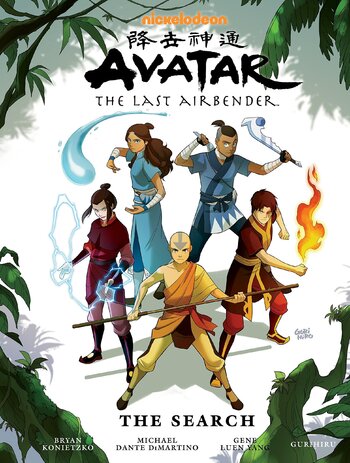 A comic book Interquel between Avatar: The Last Airbender and The Legend of Korra, and a sequel to the previous comic The Promise. It is written by Gene Luen Yang and published by Dark Horse Books.

After the events of The Promise, the Gaang is attending a lecture to figure out how best to create a new peaceful world, when Zuko is struck by the philosophy that how a ruler treats his family is indicative of how he will treat his nation. Disturbed by what seems to be a dire prophecy for his own rule of the Fire Nation, he decides he not only must find his long-missing mother Ursa; but repair his family as broken as they are. However, Ozai refuses to say a word to him about her since his imprisonment and so must turn to the only person he thinks he'll talk to: AZULA. Azula coaxes the truth out of Ozai; but with Azula being... well, Azula, she manages to force Zuko to take her along on the search, unbound. And that's not the only twist in store on the journey, as a secret about Ursa's past also comes to light...

A sequel, The Rift, stars Toph and deals with the early construction of Republic City.

The Search provides examples of: