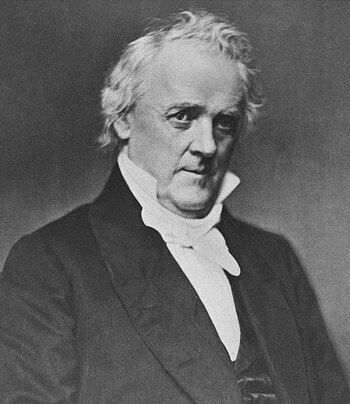 "If you are as happy to be accepting this office as I am to be leaving it, then you are a very happy man."note Yes, that was what Buchanan said while "welcoming" Abraham Lincoln.
"I feel that my duty has been faithfully, though it may be imperfectly, performed, and, whatever the result may be, I shall carry to my grave the consciousness that I at least meant well for my country."
Advertisement:

James Buchanan Jr. (April 23, 1791 – June 1, 1868) was the fifteenth president of the United States, serving from 1857 to 1861, and the fifth representing the Democratic Party. He immediately followed Franklin Pierce, but, more notably, preceded Abraham Lincoln. He was the last president born in the 18th century and the only presidentnote If you don't count Joe Biden, who was born and raised in Scranton but moved to Delaware when he was eleven and subsequently made his political career there. from Pennsylvania, although that state currently isn't very proud of that.

Buchanan remains the only president never to marry. He was engaged to Anne Caroline Coleman at one point, but they broke up, in part because she felt that he wasn't as interested in her as he was in his career, and she died shortly after. Historians remain divided on whether her death was an accident or suicide. Buchanan wrote to ask Anne's father, Robert Coleman, a wealthy iron manufacturer, for permission to attend Anne's funeral, but her father refused to allow it; indeed, the Coleman family never forgave Buchanan for Anne's death, and made it their mission to ruin his law practice in Lancaster, which was a factor in his decision to go into politics. He is somewhat widely believed (including during his lifetime) to have been a closeted gay man, who allegedly had a long relationship with Alabama senator William Rufus King, who died six weeks into his term as Franklin Pierce's vice president. When attending social functions together, Andrew Jackson called King "Miss Nancy", and Democrat Aaron V. Brown referred to King as Buchanan's "better half", "wife", and "Aunt Fancy", the last being a 19th-century euphemism for an effeminate man. Buchanan described King as "among the best, the purest and most consistent public men I have known." The truth died with Buchanan, since his relatives burned his diaries and personal documents upon his death, as per his request.

Following the deaths of his sister Jane and her husband, Buchanan became the guardian of his favorite niece, Harriet Lane

, whom he rather insistently described as his adopted daughter for the rest of his life. Harriet and Buchanan, whom she called "Nunc," were devoted to one another. When he became president, Harriet served as the White House hostess and bore the official title of First Lady, which was somewhat invented for her as she was not the President's wife.note The full phrase, "first lady in the land," was applied to Harriet by Leslie's Illustrated Newspaper in 1860. Zachary Taylor had previously used the expression to describe James Madison's wife Dolley, in his speech at her funeral, but Harriet Lane was the first person to be called that officially. Intellectual, fashionable, and pretty, she was wildly popular both at home and abroad, and a close personal friend of Queen Victoria. Buchanan similarly adopted an orphaned nephew, James Buchanan "Buck" Henry, who served as the first presidential private secretary after the federal government recognized it as a publicly funded office. (In those days, the Private Secretary fulfilled the duties of what would today be the White House Chief of Staff.)

Buchanan began his political career in the House of Representatives in 1814. He was not popular with fellow politicians. Andrew Jackson gave him the position of Minister (read: ambassador) to Russia in an attempt to keep him out of the country, where he would, in Jackson's words, "do the least harm. I would have sent him to the North Pole if we had kept a minister there." Unfortunately, this led to the impression that he had serious diplomatic/political credentials. This post was followed by time in the Senate, as Secretary of State under James K. Polk, and as Minister to Great Britain. Part of the reason he was elected in 1856 was because he was out of the country during the unpopular presidency of Franklin Pierce and couldn't be blamed for any of the administration's hated policies, particularly the Kansas–Nebraska Act of 1854. It also helped that the main opposition party of the last two decades, the Whigs, had disintegrated since Pierce's landslide victory in the previous election, and the vote against the Democrats was divided between former president Millard Fillmore's American (colloquially, "Know Nothing") Party and the new Republican Party. The Republicans also hurt their chances by running a relatively unknown Radical who had made his name in the West: John C. Frémont, who was such a boogeyman that even Ulysses S. Grant voted for Buchanan, saying later he feared Frémont's election would lead to civil war. And yes, that's ominous foreshadowing music you hear right there. His vice president, John C. Breckenridge, was the youngest vice president ever elected, at 36 years old (just one year more than the minimum required).

Those who know their American history dates know full well what happened during his presidency. Tensions between the North and the South reached their peak, and it would have taken a skilled executive to reach a compromise that could have avoided conflict. Buchanan was not that executive. His policy was, to put it bluntly, to do nothing and either let everyone calm down or wait until someone else came up with a solution. Naturally, it didn't work. He was a notorious doughface (Northerner with Southern sympathies) and his Cabinet was dominated by Southerners, with Secretary of War John Floyd and Secretary of the Treasury Howell Cobb becoming Confederate generals and Secretary of the Interior Jacob Thompson later becoming Confederate inspector general. After the election of Abraham Lincoln in 1860, seven southern states seceded from the Union during the last few months of Buchanan's presidency (and four more would later follow). Although each of the three previous presidents had played a part in creating the circumstances that led to the Civil War (Zachary Taylor's belligerent approach to the slave states got things off on the wrong foot, Fillmore signed an ultimately ill-advised compromise agreement, and Pierce pissed off the free states by breaking the terms of said agreement), the final, fatal lurch towards the conflict happened on Buchanan's watch. It didn't help that he ordered the invasion of Utah for the purpose of persecuting an unpopular Christian denomination (to be fair, he did this after receiving false information about Mormons taking over every post in the territory), or that the economy entered a panic the year he entered office.

Shortly before his death in 1868, Buchanan said, "History will vindicate my memory from every unjust aspersion." It didn't. Buchanan's desire to maintain the mere status quo (he said that secession was illegal, but that using military force to stop secession was also illegal) did nothing to mend a bitterly divided nation. By the end he was only interested in holding off the by-now inevitable civil war long enough for him to get out of office and leave the problems to the next president. He also once admitted after he left office that he didn't try to stop the South because he was afraid that hostile African Americans would try to take over the nation. Today, he is considered to be one of the worst presidents in US history, if not the absolute worst. His only real rivals for the position are Richard Nixon (who was publicly disgraced in 1974 and resigned from the presidency after his role in the 1972 Watergate scandal was made apparent), Warren G. Harding (who was similarly embroiled in the Teapot Dome scandal and died in office), Andrew Johnson (Lincoln's successor, who went out of his way to minimize Lincoln's achievements and neutered his own career after being impeached for violating the Tenure of Office Act), and — arguably — Donald Trump (certainly one of the country's most polarizing leaders, and the only president ever to be impeached twicenote The second time Trump was impeached was for refusing to concede the 2020 presidential election to Biden, and one of the specific charges was "incitement of insurrection." So, with Buchanan, he shares the dubious distinction of seeing to it that his immediate successor didn't come into office peacefully.). While Buchanan's "wait and see" approach might be excusable in not willing to saddle a successor with a war he started as a lame duck, his absolute unwillingness to do anything to counter his all but openly treasonous secretary of war or to protect federal property in the South that was taken over by Southerners is not. Not only that, but he ignored advice to move weapons and ammunition stores out of the South "just in case".

Even before his infamous last months in office, however, he earned the justified scorn of modern historians by endorsing the outrageously racist Dred Scott v. Sandford decision — which declared African Americans did not have or deserve any rights as citizens, and legalized slavery in all the territories that had yet to gain statehood — before it was handed down, after Chief Justice Roger B. Taney told him the way the verdict would go at his inauguration. Worse, it emerged years later that the Supreme Court had planned to rule only that enslaved people could not be automatically freed in territories where slavery was outlawed, due to the lack of majoritarian support for a more wide-ranging decision... until Buchanan persuaded Robert Grier, a justice from his native Pennsylvania, to support the decision that was eventually made. In retrospect, many historians see the decision as the point when the Civil War became truly inevitable, driving virtually the entire North to the abolitionist cause, and causing supporters of slavery to go from merely advocating its continual existence to demanding that it be legalized throughout the country.note In fact, Buchanan was allegedly leaning on the Supreme Court to make such a decision in another case (Lemmon v. New York), but the Civil War ended up breaking out before it could be heard. In the meantime, the Dred Scott decision only caused the "Bleeding Kansas" mess that Buchanan had inherited from Pierce to grow even worse, as he took the ruling to mean that all future states should be admitted as slave states, and spent his entire administration trying to force the admission of Kansas with a pro-slavery constitution despite there clearly being no support for it from the residents of the territory.note To wit, supporters of slavery had to move in en masse from the adjacent slave state of Missouri to try to engineer one. Eventually, Kansas was admitted during the early months of Abraham Lincoln's administration — as a free state, naturally.

Following his presidency, Buchanan retired with his niece to Wheatland, his Federal-style mansion in Lancaster, Pennsylvania, where he lived out the rest of his days in relative quiet. Harriet remained with him as his companion until she eventually married (at age 36, which was late for the time period) and moved with her husband to Baltimore; uncle and niece continued to be close, however, and she named her eldest son after him. Buchanan is buried in Lancaster, whose historical society maintains the house and grounds as a museum.

Fun fact: He was near-sighted in one eye and long-sighted in the other and one sat higher in the socket than the other. Whenever he had to focus on something, he had to tilt his head and shut the appropriate eye.