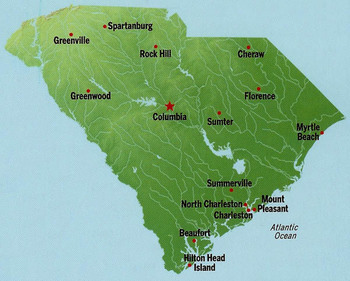 The Palmetto State.
"Charleston! Charleston! Made in Carolina!
Some dance, some prance
I'll say there's nothing finer than the
Charleston, Charleston, gee how you can shuffle;
Every step you do, leads to something new.
Man I'm telling you, it's a lapazoo!

Buck dance, wing dance will be a back number;
But the Charleston, the new Charleston,
That dance is surely a comer.
Sometime, you'll dance it one time,
That dance called Charleston,
Made in South Caroline!"
—"Charleston", Runnin' Wild
Advertisement:

Yet another of the original Thirteen Colonies, the State of South Carolina is nicknamed the "Palmetto State" (that's not a palm tree on the state flag). It actually officially declared independence from Britain a full year before the signing of the Declaration of Independence and governed itself as an independent state for the whole of that period. The famous Gadsden flag design

note The yellow flag with the rattlesnake and the words "Don't Tread on Me", a favorite of the Tea Party movement. was also the doing of a man from this state.

It's one of the archetypal Deep South states, along with Mississippi, Alabama and the non-Atlanta parts of Georgia. The American Civil War started here; South Carolina was the first state to secede from the Union (and the last to be readmitted), and the first battle of the war took place at Fort Sumter in Charleston Harbor. It was also the site of the first successful submarine attack on an enemy ship. South Carolina borders only two states: North Carolina and Georgia. Stephen Colbert is from there (but was born in Washington, D.C.). Also the home state of Frank Underwood. Other South Carolinians include Jaimie Alexander, Chadwick Boseman, Viola Davis, Big Show, Chris Rock, Darius Rucker, Eartha Kitt, The Fabulous Moolah, and Aziz Ansari.

Also, a popular 1920s dance was named after the iconic harbor city.

On Interstate 95 at the border between North and South Carolina is one of the largest Tourist Traps in the country, South of the Border, probably most well known as a big seller of fireworks.