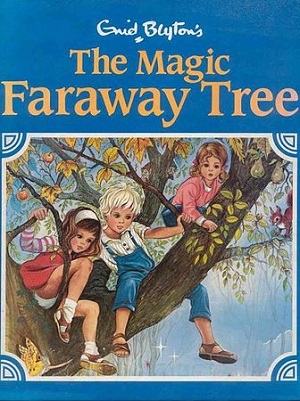 The Faraway Tree is a series of five novels by British children's author Enid Blyton.

The series follows the adventures of Jo, Bessie and Fanny (renamed Joe, Beth and Frannie in later reprints), three siblings who have just moved to the countryside with their parents. While out exploring, they discover an enchanted forest, where the eponymous Faraway Tree grows. It's easily the biggest tree in the entire forest, and is home to various fairy folk who live inside the trunk.

In 1997, The Faraway Tree was adapted into the first season of Enid Blyton's Enchanted Lands, an animated series created for the BBC by Cosgrove Hall.