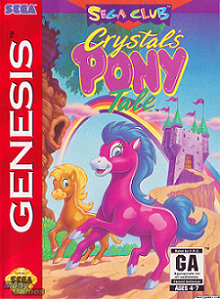 Released for the Sega Genesis in 1994, Crystal's Pony Tale is a Platform Game designed for young children starring Crystal, essentially a My Little Pony with her Serial Numbers Filed Off. She must stop an evil witch who has imprisoned her seven rainbow-colored friends, each of which require a color-coded crystal hidden somewhere to free.

The easy difficulty and saccharine tone of this game would certainly put off older gamers, but it has its own special charm.

A Sega Master System version of this game was planned, but was cancelled due to poor sales.