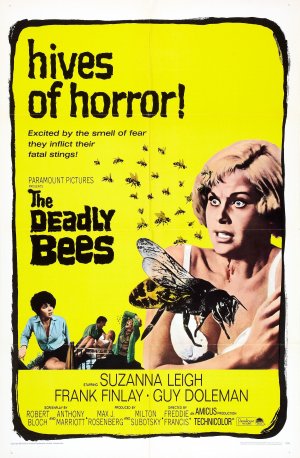 The Deadly Bees is a 1967 British horror film from Amicus Productions, directed by Freddie Francis and adapted by screenwriters Robert Bloch and Anthony Marriott from H. F. Heard's 1941 novel A Taste for Honey.

The depressing story begins with overworked pop star Vicki Robbins (Suzanna Leigh) collapsing whilst lip-synching during a "live" television performance. Her doctor prescribes some immediate R&R for her, and packs her off to an old friend of his who has a farm on remote Seagull Island, isolated from the pressures of the outside world.

Said friend, Ralph Hargrove (Guy Doleman), is a surly and despondent beekeeper, married to an equally surly and despondent old woman who smokes and only pets their dog. Vicki's vacation really kicks into high gear once she meets the rival beekeeper in town, one Mr. Manfred (Frank Finlay).note Incidentally, Finlay played Iago to Laurence Olivier's Othello only two years before this movie's release. Unbelievable as it seems while watching The Deadly Bees, Finlay also portrayed Porthos in Richard Lester's The Three Musketeers (1973).

As it turns out, there're killer bees on Seagull Island. People (and animals) are attacked, including Hargrove's wife, and Hargrove seems to be the prime suspect. Manfred enlists Vicki's help to find evidence to prove Hargrove's guilt and stop the attacks.

The film was the target of episode 905 of Mystery Science Theater 3000 in 1998, gaining it a certain amount of notoriety outside the British horror fandom. To read a recap of the MST3K episode, go here.