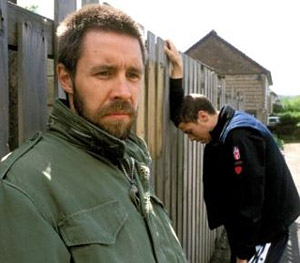 Richard and Anthony
"God will forgive them. He'll forgive them and allow them into heaven. I can't live with that."
— Richard (opening lines)
Advertisement:

Dead Man's Shoes is a 2004 British revenge thriller directed by Shane Meadows, who co-wrote it with star Paddy Considine.

Richard is a squaddie who has left the army and returned to his home town. Not for a happy family reunion, but to brutally murder the gang of drug dealers who tormented his autistic younger brother, Anthony, after he left to join the forces.

Notable for its very dark tone, a squalid setting in a dismal overcast town, and standout performances from Considine (as Richard), Kebbell (as Anthony), and Gary Stretch (as Sonny, the leader of the gangsters), all of whom were subsequently nominated for awards.