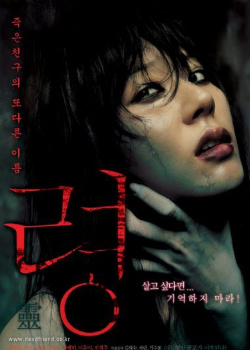 Dead Friend, also known by its original title as The Ghost (which is the literal translation of 령 or "Ryeong"), is a 2004 South Korean horror film. It was written and directed by Kim Tae-gyeong and was his debut feature. It stars Kim Ha-neul as Min Ji-won, Nam Sang-mi as Su-in, Bin (Jeon Hye-bin) as Eun-seo, and Shin Yi as Shin Mi-kyung. Both Kim Ha-neul and Nam Sang-mi previously starred together in Too Beautiful to Lie.

The film centers around Ji-Won, a teenage girl suffering from amnesia, who is being haunted by strange and disturbing visions. Things take a turn for the worst when she discovers her high school friends are being killed off one-by-one by what seems to be a vengeful ghost. It is up to Ji-Won to try to recover her lost memories and find out why the ghost is killing off her friends before it comes looking for her next.