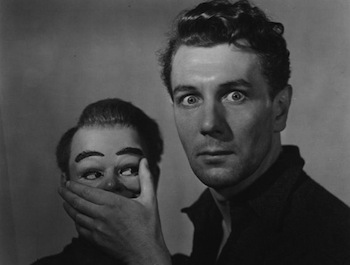 In the Framing Story, an architect named Walter Craig (Mervyn Johns) arrives at a country house to consult on renovations. Craig meets a group of people in the house and tells them that he has met them all in a dream, and that everyone was horribly murdered. Other guests recount their own supernatural experiences, including a premonition of disaster and a crazed ventriloquist dummy. Then the first man says he has a horrible feeling that the killer in his dream was himself, and begins to butcher them. He then wakes up from the nightmare, drives off, and arrives at the same country house. The film ends as it began, in a supposedly infinite loop.

There are segments, each from a different writer and director:

Not to be confused with the 2011 Dylan Dog movie.

Dead of Night provides examples of the following tropes: