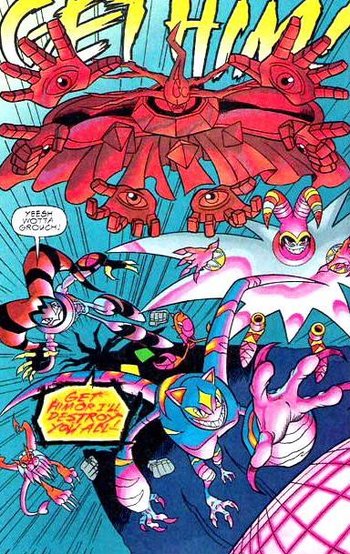 Elect a Clown and you get a circus.
Advertisement:

Clowns are easy to read as not so much a person as they are a grotesque parody of one. Exaggerated proportions in their noses and feet, skin colors unnatural to any specific human or animal, behavior that range from Ambiguous Disorder to full-on Blue-and-Orange Morality. The really bad ones are confirmed not to be human and something much, much worse. Because of this, clowns are feared by some and are made a fascinating archetype to others.

Since Coulrophobianote fear of clowns is commonplace, these are almost Always Chaotic Evil inhuman monsters. Clowns are meant to appeal to children, so they lure them in to eat them. Clowns can perform magic tricks, so they must be magical in origin. Clowns come in droves from a suspiciously saucer-like tent, so it must be hiding a flying saucer, the clowns stealing our cows to bring back to their clown planet to use our milk for their clown cereal to be fed to their clown children's clown breakfast. Clowns perform logic defying tricks and behave beyond rational thought, so they must be some mysterious humanoid horror summoned by ill-informed teenagers.

Sub-Trope to Planet of Hats. See Magical Clown and Robot Clown for other nonhuman examples of clowns. These characters might technically be Mistaken for Clown.