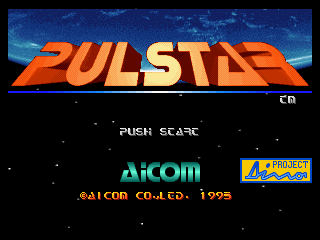 Pulstar is a scrolling shooter video game developed by Aicom for the Neo Geo arcade/home game system. Depending on who you ask, it is either a quality tribute to or an outright rip-off of the R-Type series. There are rumors that the game was developed by ex-Irem staff who joined Aicom.
Advertisement:

In the year 2248, the first recorded sign of extraterrestrial life was discovered coming from Mars. The signal emanated from the planet and from it an object travelled through space at light speed out of the Solar System. Earth scientists read the signal, but not knowing the nature of it, warned the world's defenses in case aliens traced the signal and followed it to Earth with the intent to destroy.

Eight years later, aliens followed the signal to the Solar System and began attacking the human space craft awaiting them along Neptune’s orbit. The battle between the humans and aliens spread throughout the Solar System; within two years of combat, Neptune was disintegrated, Jupiter was turned into a star and more than half of Earth's continents sank from rising ocean levels and the planet's changing axis as a result. Kaoru Yamazaki, lone fighter pilot of the Dino246, is one of the few survivors of the Pulstar attack force founded to save the Solar System from the alien invaders; it is through her that mankind may have a chance to survive the alien menace.

Has a Spiritual Successor, Blazing Star.