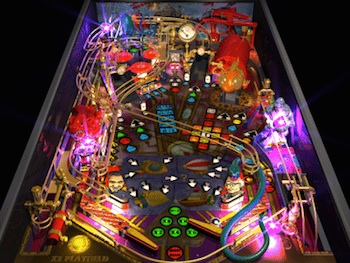 From his Mysterious Island,

General Yagov is holding the world to ransom.
If his demands aren’t met he will launch a
rocket to destroy the Moon, wreaking havoc and disaster
on a scale never before seen.
Unfortunately
nobody is able to penetrate the bizarre shield
which protects the Island.
Nobody that is, but Professor Steam!
By building four amazing steam powered contraptions,
and going on four fantastic adventures he can collect
four special crystals which will form a device
that will penetrate the shield!
Only you
can help the Professor
to build the contraptions, collect the crystals,
penetrate the shield, stop the General and

Pro Pinball: Fantastic Journey is the fourth pinball game in Cunning Developments' Pro Pinball series. It was released in 1999 for Microsoft Windows PCs, Apple Macintosh computers, and the PlayStation, and was also available for the Sega Dreamcast as part of "Pro Pinball Trilogy".

The game takes place in Victorian Britain, where the evil General Yagov is threatening to destroy the Moon, and only the intrepid Professor Steam (and his player assistant) can stop him. Collect the parts to build four amazing Contraptions, then tunnel to the Earth's core, journey to the ocean depths, fly through the tallest mountains, and sail the Amazon. Fend off various creatures including a giant Octopus and a fire-breathing dinosaur, gather four special Crystals, then penetrate the shield protecting the General's Mysterious Island and foil his schemes!

Pinball buffs tend to have mixed feelings about Fantastic Journey. On the plus side, the game engine is the best in the series, with highly-detailed graphics and an even more refined physics engine. On the other hand, the playfield and rules are a little sparse compared to earlier Pro Pinball titles, and the high difficulty curve makes it a challenge for even the best players.

Not to be confused with the Parodius game, or the 1977 television series.