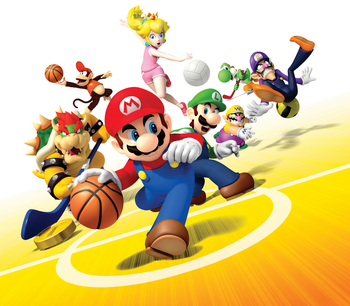 Mario Sports Mix (2010) for the Wii is the Spiritual Successor to Mario Hoops 3-on-3. Like its predecessor, it was developed by Square Enix, and features teams of up to three characters facing off in certain sports on fields with different gimmicks. It features three new sports and one sport returning from the aforementioned Mario Hoops 3-on-3: volleyball, dodgeball, hockey, and basketball. Received its own successor in Mario Sports Superstars for the Nintendo 3DS.