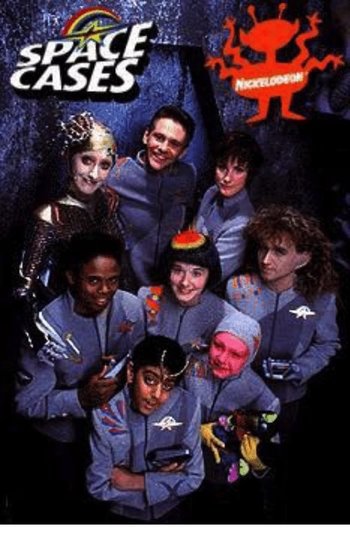 "Once upon a time in a school in outer space,
There was a class of misfit kids from all around the place.
They snuck aboard a mystery ship,
Which soon slipped through a spacial rip,
And now they're stuck on a long strange trip."
— The Theme Song
Advertisement:

A live-action science fiction show for children that aired on Nickelodeon from 1996-1998. It told the story of a group of Starcademy students from different planets who sneaked aboard a mysterious space ship called The Christa. After two of their teachers come looking for them, the ship takes off with all of them aboard, right through a white hole that drops them off over 7 years from home. They become Lost in Space...

...and by pure coincidence, Bill "Will Robinson" Mumy was one of the creators of this show. By less coincidence, Peter David is the other.

Has a Character Sheet. Also has an entertaining off-site pictorial series summary