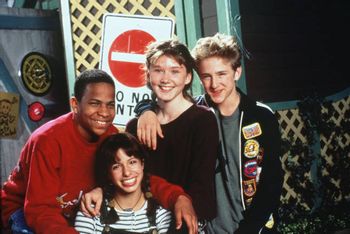 Flash Forward (1996-1997) was a live-action series on Disney Channel, lasting for 26 episodes. Thirteen year olds Becca Fisher and Tucker James (born on the same day) are life-long best friends and next door neighbors. Together, and with the help of friends Miles and Christine, they attempt to work their way through eighth grade.
Advertisement:

For the ABC series with the same name, go over to FlashForward (2009) (though this one did air on ABC Saturday mornings in the 1996-97 season as a preview-run, as Disney had just acquired ABC). No real relation to the trope of the same name.