Literature / Halo: Hunters in the Dark 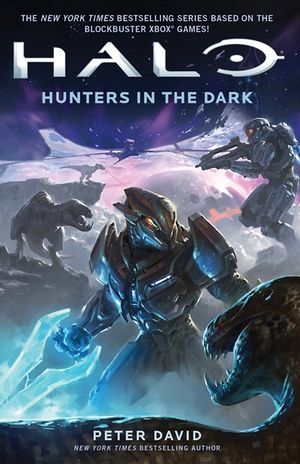 "It is 2555, more than two years after the Master Chief went missing-in-action following a decisive conflict on Installation 00 — the massive, extragalactic Forerunner construct known as the Ark — as part of the final chapter in humanity’s bloody thirty-year struggle against the overwhelming forces of the Covenant. Now, as a tenuous peace exists between the humans and the Elites, a startling scientific discovery is made…and the riddle behind its Forerunner origins could very well seal the fate of the entire galaxy within a matter of weeks. In order to unravel these dangerous secrets, a heroic, hastily formed coalition of humans and Elites must attempt to overcome their differences as they embark on a covert mission back to the Ark — an astonishing, enigmatic place beyond comprehension from which few have returned and where mortal danger awaits them all..."
— Jacket description
Advertisement:

Halo: Hunters in the Dark is the 15th novel-length book in the Halo franchise, written by Peter David in 2015. Set in 2555 (two years after the end of Halo 3 and two before Halo 4) the novel follows a joint UNSC/Sangheili expedition to the Ark to solve a mystery that threatens everyone in the galaxy.

During an expedition to the seventh Halo ringworld, scientists Luther Mann and Henry Lamb uncover a strange alien signal emanating from the Halo array, which turns out to be a Forerunner countdown reading five weeks from today. Fearing that the Halos may have been reactivated and will fire upon the galaxy once time's up, the Office of Naval Intelligence plans for an expedition back to the remains of the Ark, the enormous space station that controlled the rings. But the portal to the Ark from Earth has been inactive for years, so the UNSC are forced to ask the Sangheili for help in restoring access, with the expedition itself slated to be a joint-species affair. Tensions broil between the two species from old wounds inflicted during the previous war, but the dangers aboard the Ark will put their cooperation to the test.

Hunters In the Dark brings back old characters like N'tho 'Sraom and Usze 'Taham (the third and fourth player Elites from Halo 3 co-op) and introduces many new ones, including Olympia Vale, who has a major role in Halo 5: Guardians.