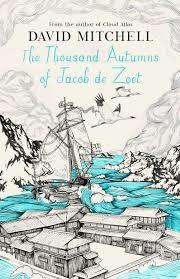 The year is 1799 and Jacob de Zoet, a young clerk at the Dutch East India Company, intends to make his fortune. He plans to stay in Dejima (the man-made island where the Dutch traded with the Japanese) for a single year and earn his fortune so he can marry his fiancee Anna. However, while he is there, he meets an unusual young woman with a burned face by the name of Orito Aibagawa. The daughter of a samurai and a midwife, she's studying medicine under Dr. Marinus and Jacob becomes quite attracted to her and Orito seems to reciprocate his affections.

However, after a series of twists and turns, both Jacob and Orito end up in serious trouble and soon more lives than theirs rest on the choices they make....

This is the fifth novel by David Mitchell. It was published in 2010 and is a current New York Times Hardcover Bestseller. Well worth reading.