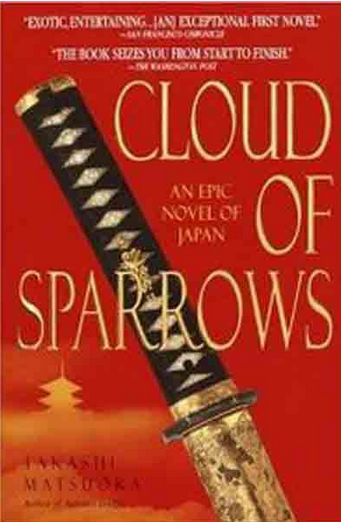 On January 1st, 1861, Okumichi no kami Genji, Great Lord of Akaoka, receives three visitors from America. Zephaniah Cromwell wants to spread the word of God, Emily Gibson is fleeing the attention of her countrymen, and Matthew Stark has come to Japan because of ten dead men.
Advertisement:

Genji's life is the target of Manipulative Bastard Kawakami; his death will break the spirit of the shogun's opponent's, resulting in a united Japan which will be able to repel outsider influence. Unfortunately for him, the Okumichi clan's gift of prophecy and the influence of the Americans will destroy him and bring an end to the samurai.

Cloud of Sparrows is a 2002 novel by Takashi Matsuoka, who also wrote a sequel, Autumn Bridge, in 2004. Compare Shogun.