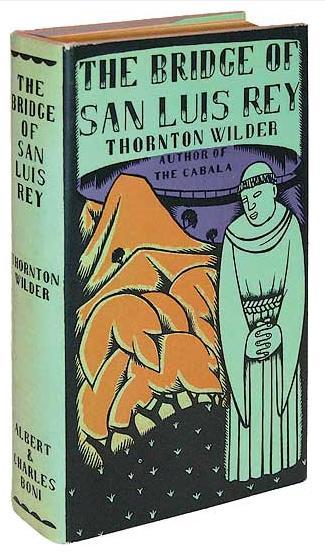 "On Friday noon, July the twentieth, 1714, the finest bridge in all Peru broke and precipitated five travelers into the gulf below."
Advertisement:

The Bridge of San Luis Rey is a 1927 novella by Thornton Wilder.

The story starts with the collapse of the eponymous bridge, a rope bridge on the road between Lima and Cuzco. The bridge collapse is witnessed by Brother Juniper, a Franciscan friar who was in Peru trying to convert the natives to Christianity. Brother Juniper, who has long wondered about fate and the nature of God's divine will, seeks to study the lives of the five people who fell from the bridge that day. By studying the lives of the five victims, Brother Juniper can show how God's will works on earth, or so he believes. The victims are:

Wilder's novel won the Pulitzer Prize. The closing lines are quite famous; none other than Tony Blair quoted them at a 2011 memorial service for British victims of the 9/11 attacks (see The Power of Love below).