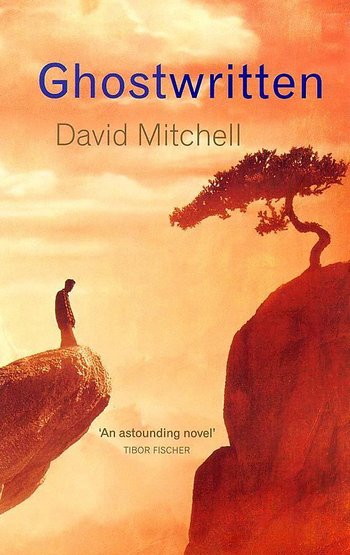 Who was blowing on the nape of my neck?
"We're all ghostwriters, my boy... We all think we’re in control of our own lives, but really they're pre-ghostwritten by forces around us."
— Tim Cavendish

Ghostwritten is the first novel by David Mitchell, published in 1999. The story is made up of nine loosely connected short stories ranging from Japan to New York. Most of the stories take place around the turn of the 21st century, although two of the stories begin early in the 20th century. Each part functions on its own as a complete story, but the events of the stories interlink and overlap countless times.

The nine narrators are, in order: a cult member living in Okinawa, Japan; a record-shop clerk and saxophonist living in Tokyo; a corrupt British businessman in Hong Kong; a tea shack owner living on a Holy Mountain in China; a "noncorpum" entity in Mongolia; an art thief in St. Petersburg; a drummer in London; a quantum physicist in Clear Island, Ireland; and a late-night radio DJ in New York City.

Ghostwritten discusses many themes, including the role of chance and fate in life.