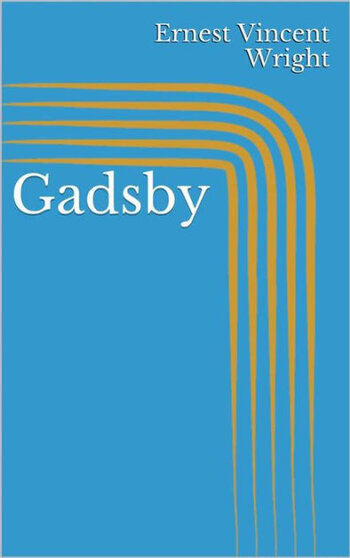 Gadsby is a 1939 Doorstopper of a book by Ernest Vincent Wright.
Advertisement:

This plot follows John Gadsby transforming a tiny town known as Branton Hills. Branton Hills starts off small, without much productivity, but a bunch of youths try to stand up for it and show adults that youths can aid a town in growing into a thriving city. Gadsby, Champion of Youth, assists in this, shaking down rich widows for cash to furnish a library, hospital, night school and so on. This flip-flops, from "Why, our town ought to build a..." to scrambling for funds to build it. Kids go off to war, but show up again without injury. Gadsby winds up as mayor of Branton Hills, watching his kids attain marital bliss, and starts growing his family with grandkids; Mrs. Gadsby also plays a part in Branton Hills' growth.

Notably, Wright challenged himself to write the novel without using any instances of the letter "E". It was originally a self-published vanity project with a limited run and didn't make a splash, but has sense gained a cult following because Wright succeed in his challenge. Now here's your challenge; re-write this paragraph to, like the former, match his work and remove the letter "E".

Not to be confused with a similarly-titled book about Jay Gatsby.

The Other Wiki has more on the book