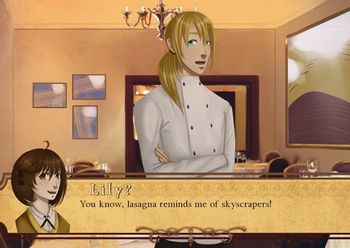 "What the hell does that mean?"
Ristorante Amore is a freeware Ren'Py otome game by Cyanide Tea

in which you take on the role of Lily Kingston, a recent college graduate who has just started work as a waitress at her uncle's high-class Italian restaurant. Though she's clumsy and has a lot to learn, Lily finds good friends in her co-workers: the serious and hard-working Ethan, the princely sous-chef Pierre, the fun-loving jock Liam, and the cute but shy waiter Laura.
Advertisement:

The game is divided into two sections, dubbed the prologue and the post-prologue. It can be downloaded here